Inspired by the rhythmic grooves of ESG, the dopey drawl of Jonathan Richman, and manic energy of The Fall, Gustaf’s live set is quick on its feet, constantly in flux, and obsessively catered to the people in the room, resulting in a sound that is emotive, androgynous, and infectiously danceable.

Comprised of Tine Hill (bass), Vram Kherlopian (guitar), Melissa Lucciola (drums), Tarra Thiessen (vocals, percussion), and Lydia Gammill (lead vocals), Gustaf got its start in 2018 when Thiessen recruited Gammill to help drive her van down to SXSW. When Thiessen’s original tour fell through, Gammill suggested pulling a band together to play in their place. With little more than a name and a handful of t-shirts, they hit the ground running, playing hundreds of shows in their first two years and earning a reputation as one of New York’s “hardest working...and most reliably fun bands” (Brooklyn Vegan).

Finding early champions in all quarters, they caught the attention of luminaries like Beck and Matt Shultz of Cage the Elephant - who had the band open for him at a secret loft party - and secured opening slots for buzzing indie acts like Omni, Tropical Fuck Storm, Dehd and New York no wave legends like James Chance and Martin Revv without any recordings to their name. They quickly earned acclaim from outlets such as Oh My Rockness, who touted, “Listen, if Gustaf is playing a late night basement show somewhere, or on a rickety roof, or in someone's shitty apartment, or just at some regular old music venue...you should make all the necessary arrangements and go.”

Gustaf’s debut full-length album, Audio Drag For Ego Slobs, out October 1st 2021 on Royal Mountain Records (Wild Pink, Alvvays, U.S. Girls), is a culmination of lessons learned on the stage and in the studio. The album is a collection of anxious affirmations, existential dread, and blind joy. Recorded at the Honey Jar Studio in Brooklyn with Carlos Hernandez (Ava Luna, Sneaks, Mr. Twin Sister) and co-produced by Hernandez and Gammill, it follows last year’s Mine 7-inch, the band’s first recorded material and a release that immediately garnered attention from outlets like NME and NPR who dubbed the band one of 2021’s emerging artists, as well as BBC 6 Music who added the release to regular rotation.

Both tense and loose, fluid yet uptight, Audio Drag For Ego Slobs sounds simultaneously like nothing you’ve ever heard before while channeling the spirit and energy of the old New York scene. Feeling like a cramped and secret house party, buzzing with kinetic energy and bristling with spirit, the title is a tongue-in-cheek play on classic compilation albums such as “relaxing tunes for an enchanting evening”. Lifted from the avant-garde multimedia artist Laurie Anderson, “Audio Drag” refers to Thiessen’s deepened pitch shifting voice filter, while “Ego Slob” is a self-coined phrase to describe someone who does a sloppy job of translating the outside world within the context of themself.

That “sloppy” ego slob spirit translates to the album’s controlled chaos, bursting at the seams—a performance of hyperbole and cathartic emotional gluttony, sonically winking at the listener lest you take them too seriously. Gammill’s swaggering half-spoken vocal melodies pierce through the album’s central bass groove, bleating guitars and restless drums.

After a year away from the stage, the band is eager to flex their muscles once more as a live act with plans to open for IDLES across the United States in October, as well as Pillow Queens in the United Kingdom in November, and prove why Brooklyn Vegan once said, “There are a lot of bands making arty post-punk, but very few who have a front person as magnetic, funny, and occasionally, scary as Gustaf’s Lydia Gammill.”

Launderette from Portland, Oregon is a 4 piece dark-wave outfit rooted in retrofuturism and rinse cycle fever Dreams. Driving chorus-laden bass, cold synth, and disco-worthy drums make up the foundation of Launderette’s sound, with all four members sharing vocals. Known for an unpredictable live set consistently compared to the B-52s- if occasionally fronted by Lux Interior of the Cramps, Launderette aims to wash away any preconceived ideas of retrofuturist, cold wave revival by incorporating their less tame punk roots.

Although they can’t- and won’t- make any promises, the chances of Synth player & pt time front person Fernando Irizzary hanging from the rafters, lipstick smeared across his torso and face,  are pretty high during their live set. At other points, Bassist Mof Ideal and drummer Ezra Emile deliver dry, angular, call-and-response vocals evoking Post Punk pioneers The Au Pairs, Delta 5, Gang of Four, or contemporary projects like Shopping. Paired with the catchy melodic synth of Bri Mecranorma, who occasionally takes lead on vocals herself, wild red hair moving like a blur into the audience, the landscape of Launderette remains minimal & catchy without losing its edge.

Just a handful of shows into 2021 Launderette made a splash, with Irizarry jumping from the top floor of a houseboat during a summer beach show at Kelly Point Park in Portland, a cheering crowd gasping with surprise and shock could be heard from the beach just before he was submerged completely in the cool waters of the Willamette. Since then the group has continued to incorporate the natural surroundings of their venue and gradually add new material to their evolving set.

Though Covid left Launderette on the dryer setting for a hot minute, the band used that time to polish their debut E.P. Dressing for Pleasure, which was released on cassette July 19th 2021 and sold out a couple times thereafter. Already working on new material, the 4-piece plans to release a full length record in the next year, accompanied by touring and -in a perfect world- more boat shows. 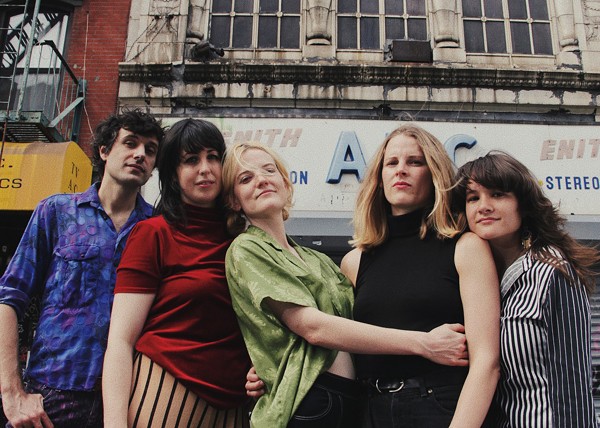 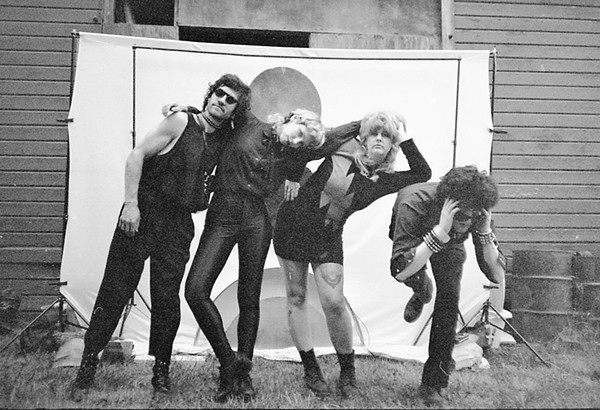