at Honey Latte Cafe
This event has passed.

A night of stand up with Jake Noll and friends!

Join Kickstand Comedy in welcoming Jake Noll (Chicago's Best Comic 2019) to Portland for their FIRST TIME. Jake is coming out of LA hibernation to bring a night of can't miss comedy to the Pacific Northwest! This show is the culmination of a year long collaboration with Kickstand Comedy where Jake has been teaching Kickstand's online stand up classes. Join us in welcoming one of our favorite comics to hit the stage Friday the 22nd!

Jake Noll is an actor and comedian with years of stand up and improv experience. As stand up, they have opened for Matt Braunger, Beth Stelling, Justin Willman, Joel Kim Booster, and Cameron Esposito. In 2019 they were named Best Stand Up by The Chicago Reader. They have performed all over the city and the country including Laugh Factory (Chicago), Break Out Fest (Second City), NBC Stand Up semi finals, SF Sketchfest (San Francisco), and Limestone Comedy Festival (Bloomington, IN). They are adjunct faculty at DePaul University and have taught stand up and improv at Second City and The Annoyance Theater. They hold a BA in Theater from Columbia College Chicago.

**Must wear mask and have full proof of vaccination
**Kickstand Comedy strives to eliminate barriers from comedy - a portion of seats at every Kickstand show are pay-what-you-want at the door. 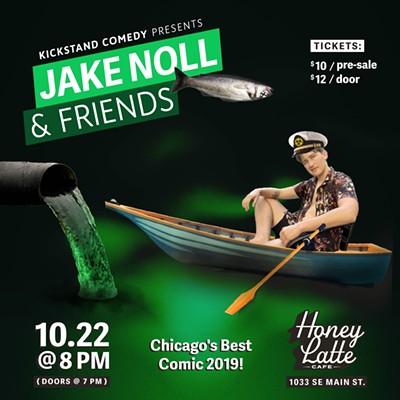