Portland band Floating Room has been saddled with a multitude of stuffy genre descriptors over the years—shoegaze, art pop, slowcore, baroque pop. But the band’s latest release, Shima, makes one thing clear: this is a rock band.

Led by multidisciplinary Uchinanchu American artist and DIY veteran Maya Stoner, Floating Room has featured a revolving cast of musicians since its inception. Their somnolent debut release, 2016’s Sunless, was recorded mostly solo and entirely in Stoner’s bedroom, while the full-length followup, 2018’s False Baptism, captured a louder, more energetic incarnation of the band and was recorded at the legendary Anacortes studio, The Unknown.

Shima arrives on the heels of last year’s Tired and True EP, which saw Stoner experiment with symphonic instrumentation and lush, soft-rock textures. Shima, by contrast, is a rollicking punk record that whips by at warp speed, highlighting Stoner’s emo and riot grrrl roots; it’s Tired and True’s photo negative. Opening track “I’ll See You Around” is an unmistakable pop-rock hit that sounds like it could have been written by Adam Shclesinger for the Josie and the Pussycats reboot; “Shimanchu” is both a paean to Stoner’s Uchinanchu heritage and a retort to the condescension she faces daily as an Asian American woman; “Firetruck” is a love song disguised as a ‘60s pop pastiche, and “I Wrote This Song For You” is a message to an inner child disguised as a love song. Shima weds the heavier leanings of Stoner’s earliest work—her first popular Portland band was hardcore three-piece Teeath, which she co-fronted—to the highly personal and unflinchingly confrontational lyrics on Tired and True. The result is an exciting development from one of the Pacific Northwest’s most exciting and stylistically restless songwriters.

Shima was recorded in a single day at The Magic Closet in Stayton OR, and was produced by Mo Troper, who also played guitar, bass, and drums on every track. Floating Room will be accompanying Drug Church, Citizen, and Glitterer for every date on their U.S. tour this fall/winter. Live, Stoner is joined by Mo Troper on drums, Brenden Ramirez (Bory) on guitar, and Keegan Bradford (Camp Trash; reluctant Twitter celebrity) on bass. Shima releases on digital and 7” vinyl via Famous Class Records on November 12, 2021.

Meet Guppy: the rad trio of musicians behind the new EP, In The Garage. It's aptly named, as their band literally grew out of three friends hanging out in a garage jamming around. Their sound is sharp and fresh, a funky melding of soft, bedroom vocals with heavier, punky guitar, bass and drums. Are they the new, gayer Green Day? After listening to In The Garage on repeat for the past several days, we can confirm: they will be.

Guppy's made up of Julia Lebow on vocals and guitar, Marc Babcock on bass, and Gabi Cohen on drums. The three have created what truly is shaping up to be our new end-of-summer soundtrack—on "Hollywood Rejection," for instance, Lebow croons a middle finger at conformity and at settling down with a 9-to-5 job, and on "Went to the Mall," she sings over roaring instrumentals about having fun and fucking responsibility. 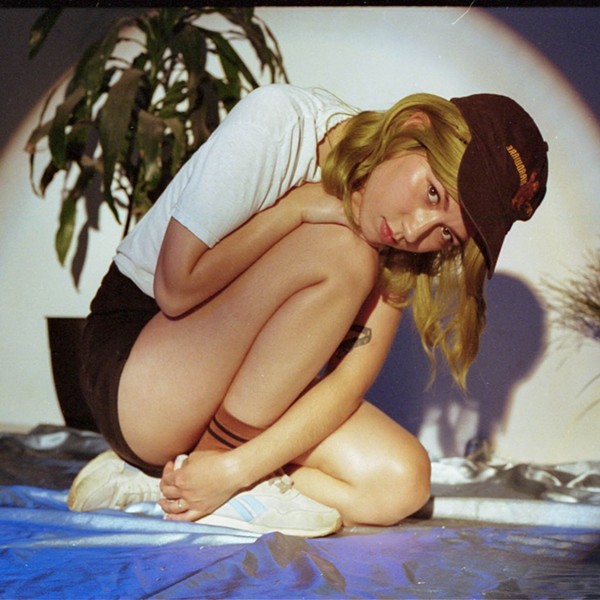