"Come witness rock'n'roll history! San Francisco's very own Cool Ghouls live in concert for the first time since 2019! They're a fantastic unit for playing rock'n'roll! Not to be missed! Truly a gem!"

Founded by former high school friends from a Bay Area suburb, the band consists of guitarists Pat McDonald and Ryan Wong, bassist Pat Thomas, and drummer Alex Fleshman, with Wong and Thomas sharing lead vocal duties. Their first release was the six-track Alright Cassette in late 2012. They quickly gained admirers in San Francisco and beyond with local hero Tim Cohen (the Fresh & Onlys) jumping on board to both champion the band and produce their 2013 self-titled full-length. Working quickly, they returned a year later with 2014's A Swirling Fire Burning Through the Rye. For their third album, Cool Ghouls invited songwriter Kelley Stoltz to produce the sessions. Stoltz also played guitar with the group in the studio, as did pedal steel guitarist Tom Heyman. The album Animal Races was released by Empty Cellar in August 2016.

A tour cassette recorded in their practice space, Gord's Horse, then a live tape recorded in 2019 titled Live '19, were issued over the next few years as the band played live shows. By the time the latter was released the band were no longer playing live and the members embarked on life choices that made being in a band more difficult. That didn't stop them from a five-month session of writing, rehearsing and recording songs, 27 in all, in 2020. Working in a small garage studio, the band expanded their psychedelic garage rock sound to include folk ballads, Baroque pop, and sunshine pop aided by strings (provided by Dylan Edrich), keyboards (courtesy of Henry Baker), and the horn section of Danny Brown on sax and Andrew Stephens on trumpet. Choosing 15 tracks from their bounty, At George's Zoo, was issued by Empty Cellar and Melodic Records in March of 2021. ~ Timothy Monger, Rovi

The new Lavender Flu album, "Mow the Glass", was recorded in the living room of a small house on a cliff overlooking the Pacific Ocean. You can hear it in the music. The Oregon Coast. The dream life of an Axolotl. The open sound of a band playing to an audience of endless water, sun, and sky.  A bald eagle flew by the window every few hours; as if to remind the band where they really were. Still, the laughter was real, the freedom was magic, and the tambo was sprinkled like sugar.

"Heavy Air", the previous album, was a home recording project. The songs started with Chris on a guitar or a synth or a bowl of cereal and were built up from there. A rotating cast of friends and family helped flesh out the material. It could have been made in deep space or at the bottom of the ocean. Transmissions from a bedroom at the bottom of Pill Hill.

"Mow The Glass" is a reflection of the live experience. Four people playing together; working within the template of pop classicism. 35 minutes of music. This time, the Flu comes out of the water and spends a little more time on land: pop kicks, psychedelic derangement, beauty, spells cast via hate raga and rocker. The band moves backward, forward and sideways; often within the same piece. The music breathes. It doesn't deal in nostalgic regression or self conscious futurism. It just sounds like the Lavender Flu.

Or maybe Ursula K. Le Guin whispering to James Tiptree Jr. in heaven:
Follow the Flowers. They lead to a field of knives. Look to the Sewer. It's there where your teacher lies.

This music will crawl through your mind. Palpitating off the walls of incandescent android phone lights and lonely aching web pages. Streaming through reverse lives, lost in endless coded corridors, hallucinating connections to other humans via bitrate embrace.
The enemy is everywhere.

Mow the Glass. Return to me.

Since 2012, WIBG have consistently released singularly engrossing psych rock that’s the perfect amount of strange. Frontman and guitarist, Justin Fowler’s warbling vocals are as entrancing and invigorating as the rhythms the band potently pulls together helmed by, in its current iteration, Dan Galucki (drums), Nathan Moore (bass) and Cory Gray (keyboards).

Winnie & The Nihilist is nine tracks of jam-pack, non-stop energetic fuel, that will leave listeners daring to seize the day, or at the very least, partake in some solid moshing (here’s looking at you, “Sunshine”). The title track sets the stage as Fowler’s voice calls out “all hail the sun of the season” before asking, “did the future already happen? Is the future already here?” as each note gleams and reverberates on the beaming track. “Turned On & Terrified” doesn’t miss a beat, as the momentum continues to build from the get-go. A subtle nod to 60s rock creeps its way into the track as female harmonizers caressingly sing, “ooh la la la ooh” while instruments wail and crash in the background.

Closing track “Never The Same #2” ends on a rollicking, meditative note with a lengthy exchange between band members before lyrics come into play at the 2:30 minute mark, along with down-tempo, breezy melodies, whistling, and those bubbly female harmonies, before brining it back to where it all began – unfiltered, unapologetic rock.

Soak in those sunny vibes and go make shit happen. 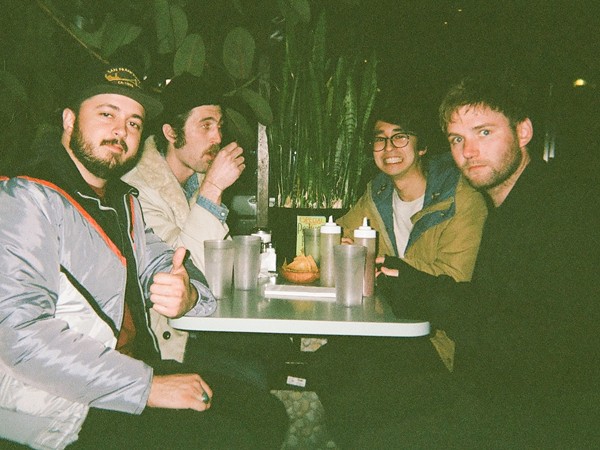