Four hours south of Portland, Oregon, the Rogue River flows right through the center of a small municipality called Shady Cove. This is where songwriters and multi-instrumentalists Sarah Rose and Sarah Nienaber, formerly of Candace, recorded the track that would become the name of their new project; this is where, in an unassuming cabin, the two seasoned collaborators began exploring desire’s revolutionary potential and the nomadic impulses borne of creative restlessness and the claustrophobia of city life.

“We were not writing these songs with the idea of a band in mind,” says Sarah Rose, describing how the album came together. “It felt like these songs wanted to belong to something new, rather than the continuation of a previous project.”

“We’re always searching for the right place, the good place, the landing place, the final resting place,” Nienaber reflects, implying that the only thing that will satisfy desire is more desire. “In these songs, I think there is a self-conscious acknowledgement that I, or you, or we, will never get there… Shady Cove is a celebration of that unshakeable longing, the forever search.”

Sacramento-based musician Caregiver (Lindsey Bitson) has spent a lot of time with her thoughts, reflecting on heartache, substance abuse, and self-discovery. She’s channeled it all into an absolutely dreamy, self-released debut album called Bathing in Yesterday’s Fires. Bitson’s proclivity for emotive vocals and storytelling comes to life in a lush, sonic landscape. The record is a vulnerable exploration of the human condition with mesmerizing production from Jon Joseph that envelops listeners in her experience. The result? A cleansing resolution–cathartic and brutally honest songwriting at its best. Lindsey (Vocals, Guitar) is accompanied by Keyboard (Anthony D’lallo) Drums (Nick Danneo), and Bass (Noah Cole). 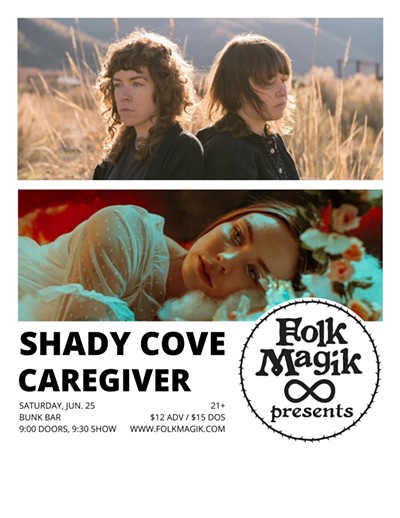