at Bazi Bierbrasserie
Sold out.

Bazi Bierbrasserie and organizers of the Portland Fruit Beer Festival present the 3rd annual Cherry Festivus, a celebration of cherry beer and cider with chocolate pairings and cherry food and cocktail specials. Held just in time for the holiday season, the 3rd annual Cherry Festivus will take place with a limited ticketed VIP session on Fri. Nov. 17th and general admission and walk-up entry on Sat. and Sun. November 18-19th. This years mini-fest features more than twenty-five rare beers and ciders made with cherries in a variety of beer styles and cherry varieties, from light and golden Rainier cherry farmhouse ales to tart pie cherries, rich black cherries and even barrel-aged stouts with local bing cherries. Fest-goers also have the opportunity to pair locally made artisan chocolate from Xocolatl de David with their beers in pre-selected individual pairings or beer and chocolate flights.

Alesong Brewing & Blending: Cherry Parliament
We initially matured this unique wild ale on Oregon Pinot Noir barrels. It was then moved into second use bourbon barrels with bing and lapin cherries from Hood River, OR, to provide tart and sweet flavors that marry with the mild oak and funkadelic yeast complexities. Ya dig? 7.4% Abv.

Almanac Brewing: Cherry Picker
Cherry Picker is our newest fruit-forward Brettanomyces ale. After hand-selecting our best Brett beer barrels with the brightest fruit character, we added Balaton and Montmorency cherries picked from the very highest tree branches, closest to the sun, for maximum ripeness. We then blended the components back together, fusing Brett funk with cherry pie aromas to create a rich, crimson, cherry bomb of a beer. 6.9% Abv.

The Bruery: Sans Pagaie
A take on a Belgian-style kriek, which is a sour blonde ale aged in barrels with cherries. The base beer has a subtle funk, which melds gently with the fruit giving this beer flavors reminiscent of coconut, vanilla yogurt and of, course, fresh cherries. A complex beer, perfect for a warm California day in the park with a slice of homemade cheesecake. 6.6% Abv.

Crooked Stave Artisan Beer: Petit Sour Cherry
Tart Cherry is the fourth varietal in our Petite Sour series. This 5.5% ABV beer pours a rich red, with a snap of tartness from the addition of the equivalent of over a pound per gallon of sour cherries, after being primary fermented in oak with our mixed culture of wild yeast and bacteria. 5.5% Abv.

De Garde Brewing: Kriek
Our spontaneously fermented golden wild ale, blended from multiple years of barrel fermented and matured stock, refermented on regionally grown Montmorency and Morello cherries. The nuance of the blend matches up elegantly in this fruit forward beer, with the Montmorency cherries providing their typical spice notes and the Morello cherries offering bold color and flavor. This particular blend incorporates a greater amount of Morello than normal for us, providing a more intense color and depth of fruit character. Crisp carbonation, an earthy funk and delicate oak balance the anticipated vibrant fruit character.

Double Mountain Brewery: Devil's Kriek
Flanders Red Sour Ale with Cherries
The cherry harvest in 2013 was much different than 2014, as each harvest year is, and it’s effect on the beer is something we watch very closely. When dealing with Mother Nature, one must remain open and flexible.  The 2013 vintage of Devil’s Kriek was made with straight Bing cherries from the Double Mountain Orchards in Hood River.  After spending 13 months on the fruit in our cellars, a small amount of yeast was added to each bottle at packaging time.  It’s a bright and deep crimson, bracingly tart and funky, and juicy and delicious. The bottle conditioning will allow the character to deepen as it ages. 9.3% ABV, 9 BU

Deliciously tart wild ale with a brilliant red tone blended from 1-3 year old barrels of our house "Wild Tacoma" mixed culture ale. Racked onto whole Bing cherries from our friends at Diamondback Acres in Chelan, Washington. Crisp, and refreshing with a slight hint of barrel character.

Logsdon Farmhouse Ales: Krieke Vier
A quadrupel based beer with intense Kriek flavor aged for 4 months in bourbon barrels with cherries. This beer was compiled by the Logsdon crew of 4 with 4 of our initial seizoen yeast strains and 4 more cultures of Brettanomyces and lactic bacteria. Krieke Vier is a big beer with great flavor intensity and incredible cherry complexity that is smooth and easy to drink. 9.9% Abv.

Portland Cider: The Queen's Kriek
We’ve combined Belgian & English traditions with fresh Oregon Cherries and classic beer making techniques to create a dynamic Kriek-style cider.  Aged for over 6 months, with at least 1 month in charred oak barrels for tons of body, character and depth. Dry, and lightly tart, with a little fizz; Truly a cider fit for the Queen.

Ruse Brewing: Kriek
Flanders red base primarily fermented in stainless with our house ale strain then transfered into pinot noir barrels from Violin Wine on top of 100+lbs/cask of Bing cherries from amazing fruit growers Baird Family Orchards. All bacteria and yeast sourced from the skins of the fruit. 6.2% ABV.

Upright Brewing: Shades
Shades also uses cherries from Baird, although in this case we’re talking Rainiers, which don’t alter the color of the beer. This is deceiving, because it’s loaded with fruit flavor–employing over 100 pounds per cask–although this blend only comprised six barrels. Upright brewers used two different lots of cherries, one notably sweet and the other tart, and inoculated the casks with three different brettanomyces strains. The beer was aged and conditioned just like the Hearts’ Beat, but the brett was pushed further to produce a funkier aromatic profile with a bit more acidity. Both beers are named after a Charles Mingus composition from his album “The Black Saint and Sinner Lady.” 8% Abv. 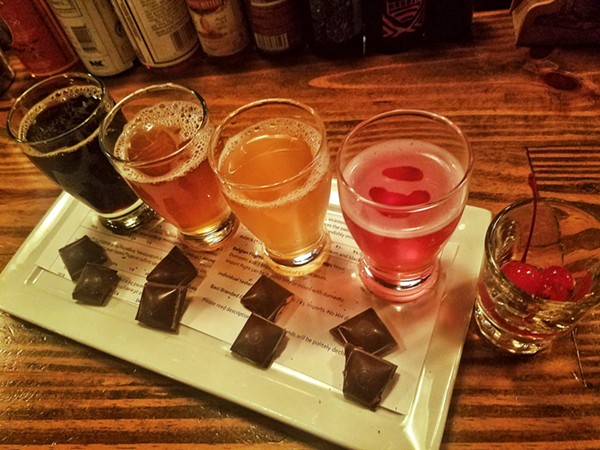 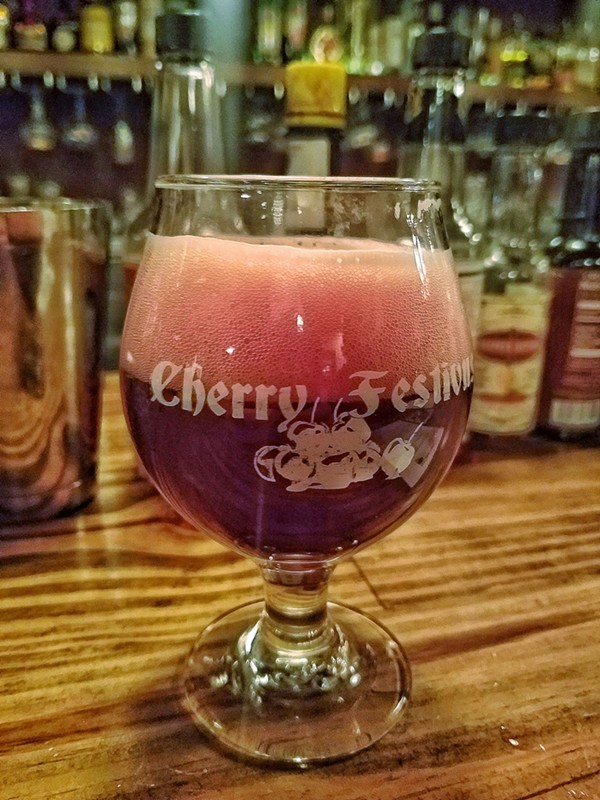 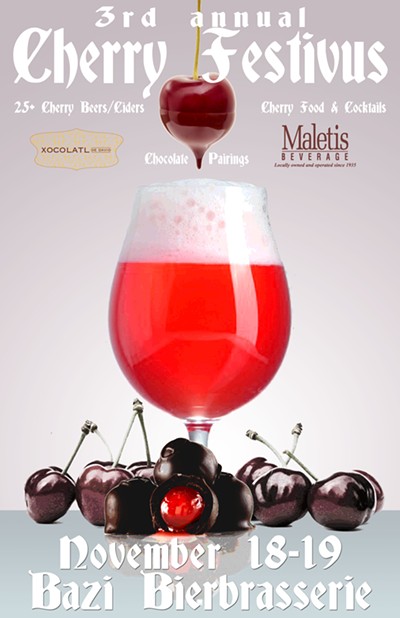