NORTH COAST-ANYBODY
North Coast, New York City’s premier hip-hop improv team, has long been known for their seamless melding of freestyle rapping and long form improv comedy. But in the heat of Lin Manuel’s smash Broadway hit Hamilton, people have been going f****** bonkers for historical raps. We hear you loud and clear.

NEPOTISM
Kerry Leek and Noah Goldenberg are an Aunt/Nephew team who use their close relationship to anchor their scene work in emotions and relationships, all while having a ton of fun. Although they first appeared together on stage in a production of Midsummer Night’s Dream 10 years ago (they were both fairies), they formed Nepotism less than a year ago. It finally occurred to them that improvising together might be a really great idea. 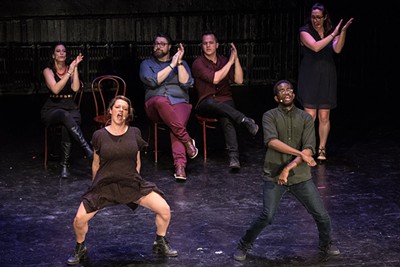